“Whatever Happens In The End, I Don’t Want To Lose You As My Friend” 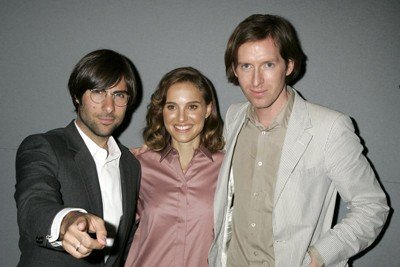 Since Jason Schwartzman and Natalie Portman are both unwieldy Jewish names, we’re abbreviating them to the Salinger-like initials S. and P.

Speaking of Donald Sutherland, he gave his best in the first episode of the horrendously titled Dirty Sexy Money. There’s a Baldwin fucking a tranny, Anna from The O.C. (Samaire Armstrong) does a fantastic Gwyneth by way of Paris, but there’s something about Peter Krause’s smug actor face that just makes me want to punch it really hard.

S. sets his iPod to playlist “Songs To Seduce My Ex-Girlfriend Natalie Portman.” This is what it looks like when somebody comes over and is in your room for the first time, except your speakers aren’t as nice.

That and the dullish Gossip Girl have made me realize that I never need to see another show about rich people. Especially not in Manhattan. Yes ridiculously wealthy families have been a tragicomic staple from the Greeks to My Man Godfrey to The Bluths but honestly, market saturation time this season. More shows about blue-collar, white-collar, pink-collar folks plz.

Wes wanted Natalie to smoke, but she’s one of thoooose people, so she asked to use toothpicks. He likes it better this way. So do we.

One of the things that drives people crazy about Wes Anderson is his apparent lack of interest in engaging with the messiness of the real world. With each film he seems to get further away from real human beings: the way they sound and behave.

When he tries to approach realism, to say something emotionally honest, it’s like he backs off immediately in embarrassment. He wants to reveal without really being vulnerable or giving us anything of himself and that’s why it feels, as Holden Caulfield would put it, phony.

Truffaut said that to be in the Nouvelle Vague you had to make a movie of personal importance before the age of 30. All those New Wave dudes made films that were in some way autobiographical. Anderson’s films have become more aspirational, a bigger model train set (so to speak) each time, but the same shallow emotions and characters. I know Owen Wilson doesn’t like people picking apart the scripts for evidence of his input. Their collaborations, like Lennon and McCartney’s, are insoluble.

I do feel strongly that Wilson contributed some ineffably vital thing which made those first two films so meaningful and affecting to people and has been waning out of Anderson’s work since. Wes Anderson glorified and idolized the Upper Class and now he a member of it, giving heft to the famous lie that America is a meritocracy (it is not). He does not appear to have become disenchanted with the wealthy yet.

It’s like he read the first half of The Great Gatsby, bookmarked it, and forgot to read the rest. And now that he’s done commercials and has been ripped off so many times, it was harder to watch this thirteen minute short than I expected. There’s something to be said for all his films on their dazzling visual merits alone, I just wish he wrote better scripts.

He fetishizes objects like no director since Hitchcock, and when Hitchcock did it you didn’t get the feeling that he was trying to sell you an expensive yellow silk bedspread and yellow bathrobes and the accordant expensive arty ex-pat Parisian lifestyle that only (daughters of famous directors) Sofia Coppola and Zoe Cassavetes can actually afford.

Why are we so incredibly hard on Wes Anderson? Because we loved him, we trusted him, we wanted him to be “our director” forever and he broke our heart. I mean the suitcases in this movie are Marc Jacobs for Louis Vuitton. I am not saying that if I had a million dollars I would not go straight to the Marc Jacobs store on Melrose and buy a bunch of shit I don’t need, but I just can’t get behind this kind of post-modern tacit endorsement of capitalism.

The unstemmable lust for things you don’t need and can’t afford, for yellow bathrobes and monogrammed suitcases and room service grilled cheese sandwiches, is a cancer on the earth. It is the reason we are ruining the planet and most of us are criminally depressed. It’s why China’s going to take over the world and why polar bears are dying. Perhaps the journey through India in Darjeeling Limited will be about abandoning materialism. But it will probably also be about nice sneakers and customized suitcases.

Rushmore paved the way for a lot of the New Awkward Comedies focusing on character but Anderson stepped out of the fray to build bigger and better sets, buy cooler and weirder things. Like Stanley Kubrick, he deals in hermetically sealed fantasy worlds largely void of emotion. Perhaps it would serve him better to do adaptations. I’m still excited for his next project, Roald Dahl’s The Fantastic Mr. Fox. (not to mention the Spike Jonze/Dave Eggers monster mash Where The Wild Things Are).

The two most honest directors right now, in my opinion, are Judd Apatow and Andrew Bujalski. You shouldn’t need anything more than the interaction of characters to make a film interesting. Nothing about “Hotel Chevalier” feels authentic, including its attempt at mumblecore type awkward dialogue when P. tells S. “if we fuck I’m gonna feel like shit tomorrow.”

Totally feeling Natalie on the “mysterious bruises” tip. I walk into chairs a lot.

Anderson still gives off the air of a person who is horribly embarrassed that his dad is a barber instead of a brain surgeon, but even the father issues emerged swathed in layers and layers of obfuscation. I have yet to see a Wes Anderson movie that lets me know what Wes Anderson really cares about and feels.

Hey look, it’s Natalie Portman naked. Now you’ve seen it. She was a little girl and now she’s naked. Congratulations creepy pedo pervs of the world, you totally won this round.

I am sure it is weird to be a kid from Texas suddenly ensconced in the privileged prep-school world you always dreamed of. I can only imagine what Wes’s relationship with Imitation Of Christ designer Tara Subkoff entailed. I remember when he did his first magazine cover with the sleek hair and no glasses. He drank the high fashion Kool-Aid and now he has backed himself into an extremely well-furnished corner.

Truffaut’s Antoine Doinel series movies are some of the most self-absorbed, solipsistic, misogynistic films ever. But they’re still great and fresh because they are about timeless emotional issues and conflicts. They’re also very much about Francois Truffaut, and in that way very personal. All I know about Wes Anderson these days is he likes personalized luggage, and that is no longer enough. 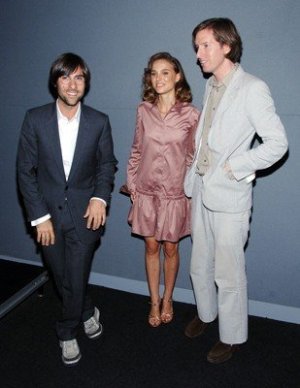 Songs From The Life Aquatic Soundtrack:

Molly Lambert is Senior Editor of This Recording. Like Wes Anderson and Owen Wilson, her favorite film critic is Pauline Kael.

14 thoughts on “In Which We Promise We Will Never Be Your Friend, No Matter What, Ever”