The Custom of the Times

I seem to remember Tess doing a piece on bargains in LA, so I thought I’d do the companion piece for NYC. It is my belief that if you only customed the places I mention here, you could survive on a yearly income of $12,000 and still have your health and booze and interesting things to say sometimes. Additions and testimonials welcome in the comments section.

I’m not so sure the term “roll” is as singularly referential anywhere else in the world. If you are in Brooklyn, you must say the phrase “can I get a” before uttering the name of this sandwich at a corner store or deli.

Also, you must call the guy making it “Boss”, and agree to be called “Boss” by the guy who rings you up. For all this, you get breakfast for the price of a Diet Dr. Pepper.

My research shows that I ride the New York City subway approximately sixteen thousand, nine hundred, and forty-five times a month. This card costs 76 dollars. That means every time I ride in that metal tube filled with other people’s breath it only costs me half a cent. Cool.

I used to live just off Broome St. in Little Italy, and this place was a savior. The first time I had one of their famously cheap ($2.95) Bahn Mi sandwiches, I nearly puked it up in that park on Chrystie Street. I had made the mistake of ordering some crappy curried chicken concoction that clearly nobody had ordered in ten years.

The classic sandwich there is, I suppose, the #1, a spicy Vietnamese pork with cilantro, shredded carrots and onions, and several full-length cucumber spears stuffed into a nicely toasted 12-inch French-bread-ish bun. In my brief sentence in Manhattan, I would say I ate this sandwich, on average, 5.4 times a week and survived just fine. You could too.

Even if you don’t like modern art, or feel morally compromised by the new MoMA building, this hot little ticket entitles you to free admission to any or all of the usually three film screenings a day at MoMA’s 53rd St. theater annex. They literally show a non-stop rotation of the best cinema ever created, much of it never before seen in the United States.

Yes, it’s a bit out of the way to see a movie on 53rd St., but believe me, the E or V train lets you out across the street from the theater. You will hardly know you’re in midtown. And yes, especially during the day when everyone else is working (I hardly do that), you will be watching movies with 113 elderly people who engage in petty arguments until the lights go down. But then it’s bliss, and oh, free every time you go.

This is where you will be doing most of your drinking. This little bar and restaurant sits tucked below street level on 13th St, just west of 6th Avenue.

The only things I’ve seen the mostly male, mostly 65-year-old, mostly Spanish patrons drinking are Bud bottles (2 dollars, are you kidding me?) and some whiskey I can’t recall, without rocks ($4). And then once you’re getting good and buzzed a miraculous thing happens: the bartender, who no joke has been working there for 55 years (look at the picture of him in his 20’s above the bar), brings out plate after plate of FREE spanish vittles, each piece conveniently skewered with a toothpick.

I wouldn’t call them tapas, exactly–most often it is Spanish sausage, roasted potatoes with wing sauce, or meatballs; sometimes it is fried chicken in more garlic than you can handle. The fact that you can get slurringly drunk and also eat what turns out to be a full meal for less than 20 bucks make it a popular spot for the neighborhood New School and NYU MFA students. You shall know them by their funny hats.

Though we haven’t actually been there yet, Dan Murray and I are pretty sure we are going to be buying all our dark-hued clothing here from now on. We know you have drooled your way around the APC store in Manhattan, trying not to trip on the poorly-spaced floorboards or lose your lunch over a price tag.

Well now you might actually be able to buy a little hot koochur for yourself, because everything at APC Surplus is 60% off. The store, which is open Thursday-Sunday from 1pm-7pm, only sells clothing from APC’s past seasons, but for those of us still wearing boot-cut jeans, this shouldn’t be a huge problem.

If you’ve gotten sick of Spain’s free finger-foods, and have about 5 bucks to spend on real food, head to this (also-Spanish) diner for some meatloaf with rice and beans. Though I’ve never seen a female in this place, I’m sure they’d have no problem with it. Before having their espresso – which, at 75 cents, is dynamite – I didn’t think people still accepted quarters in New York City.

Yes, The Strand is a good place to buy books, and for pretty cheap. But honestly, they aren’t that cheap, and you never find anything really good, especially in the cramped Poetry aisle where there is invariably one cute girl and one bearded old failed poet gawking at her and blocking my way to the Robert Creeley section.

The basement Review/Advanced Copy section is kinda cool-you basically get all the new hardcover schlock for half-off. But alas, The Strand-Less-Traveled, and by this I mean 3rd Floor Rare Books department, is really a dream for those of us with rarified literary tastes, a penchant for esoteric and elegantly bound books, and little to no disposable income. This is where I get gifts for people, because they invariably think you spent 50 bucks on them when you really spent 15. Gotcha!

Will Hubbard is the contributing editor to This Recording. He lives in Williamsburg.

Molly went to Georgia in her mind.

The chance to become something larger than what we are. 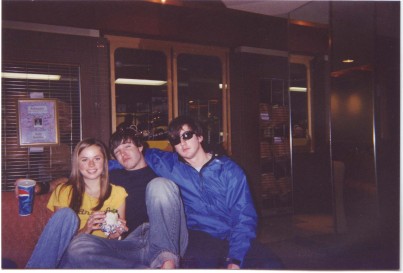 back when our contributing editor and dan were twins