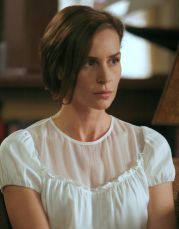 After I missed the debate last night because of my dad’s in-house client, (god forbid Candy Crowley interrupts analytic transference), I get back to the TV and discover that HBO is lifting plots straight from the Times’ Modern Love column. Amy, a production executive, has enraged her seething husband, formerly her seething adulterous lover, by leaving him to dangle with the therapist (they both blame her tardiness on the bad appointment hour) while she is…shopping, consulting her doctor, trysting with her gynecologist?

After five years of IVF, the couple have managed to become pregnant but Amy wants to terminate. Jake is angry and obsessive; Amy is blithe and avoidant. They want Paul to make the decision for them. 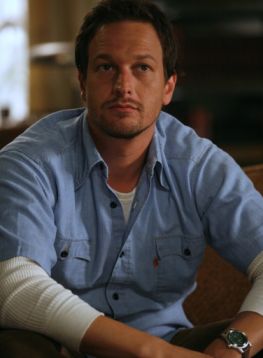 Poor guy, he’s facing more policy questions that a presidential candidate this week. And he actually takes it to heart and considers that he is a murderer for suggesting the couple should have the abortion.

You’d hope your therapist has a little more spine or resourcefulness than to offer an actual answer to a question.

While these two don’t face financial difficulties, they obviously have commitment fears, fears of a woman’s body, conflicts over the rights of the fetus and the father. Paul should just suggest that they go to see 4 months, 3 weeks, 2 days, and then make up their minds.

Somehow Byrne is the more believable listener with two clients instead of one; maybe this is just the dramatic premise of a one-act play with three characters instead of two. He actually has something to do besides being receptive (but hey, this is my problem with Dr. Y, he wants to participate too much.). He finds himself translating, or in analyst-speak, bridging between the sparring couple. 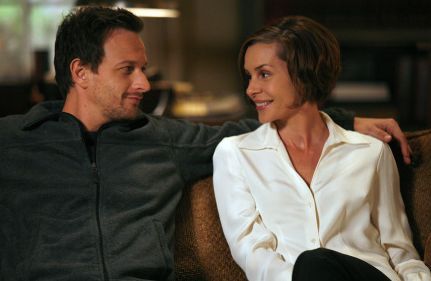 My parents are the exact demographic for this un-lively debate.

My mother, a Catholic, says that they can always have the child and decide to give it up for adoption.

My father is immediately incensed. “Will you stop with your pro-life strategies? Why don’t you say they should have an abortion and have another child later?”

I can’t tell if they have these conversations when I’m not around to meet them; it’s one long dialogue in which my dad attempts to prove the inhumanity of man against man from the Inquisition to Pope Pius XII and my mother holds on to immovable faith.

I’m really thinking the most valuable part of Jake and Amy’s session is that it lets you into the ambivalence you suspect many parents feel about parenthood. Sometimes you only suspect it; sometimes, like Ingmar Bergman, you find written proof of how they despised you after they die. I guess the upside is that you get to make movies with post-Strindbergian candor.

Karina Wolf is a contributor to This Recording. You can find her previous essays on In Treatment here, here, and here. She lives in New York.

There are many things thatI would like to say to you but I don’t know how.