Fuck the Cloverfield Guy Who Wrote This Episode

Last week I told y’all everything that happened between me and my online object of affection, iwantjackinsideme891.

Your feedback came in waves, and since it is the first even semi-supportive things people have said to me since I assumed the office of Vice President, I listened.

Of course, most of the letters I got were not as positive. Here’s an example:

Shouldn’t you be in a trench somewhere with Eva Braun? 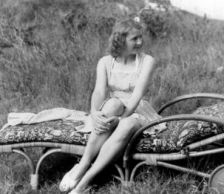 Try Nerve Personals. It’s where all the sluts are.

Helpful, but I only have one woman I want to have incredibly demeaning sex with. Actually, make that two after last night.

check out the new issue of LOST magazine

Much like Angelina Jolie’s trip to Iraq, which I’m sure will give the nancy proprietor of this blog reasons to ferret our various unpatriotic pictures of our troops, the interaction of the blonde bombshell Juliet and the dark warrior Sayid is likely to energize sexual relationships from Baghdad to Peoria.

Before last night’s episode, I was pretty down. My guy Mitt Romney dropped out of the race for president. Plus, I had to go back and hunt quail where I shot that bastard Whittington in the face.

ah yes, the ejaculation station. i know it well

I hadn’t heard back from the online love of my life since I wrote her last week’s e-mail, and I wasn’t expecting much. I spent most of the week trying to find the fabled Evangeline Lilly sextape.

On the plus side, I finally did find it (tune in next week, I’ll need some one-on-one time with this illicit little doe). On the minus side, Lynne refused to wear the Kate mask in the bedroom.

I have a man in your moat. Fuck, let me try that again. I have a van in your throat. Sweet rhyme. One more time. I have a dam in your float. I have a slut in your vote. I have a butt in your tote. That’s better.

I wasn’t going to write to iwantjackinsideme891 again, but four things happened to change my mind on that.

The first was that I found this superhot picture of myself with Gerry.

are you reeling in the yeeeeeears

The third was that I saw Cloverfield. Good god. I call this movie White People’s Problems. If I was to see how a bunch of rich, spoiled white people reacted badly to unspeakable horror and tragedy, I’ll rewatch my home videos from the fall of 2001. With that said, I had a cousin who died in Cloverfield. R.I.P. my little white angel.

The fourth thing was last night’s Lost. I immediately sat down at the computer to compose the letter I felt would surely win me my true beloved.

Since you didn’t return my last e-mail, I had made up my mind to never send you my celebrated musings on the latest Lost.

Then four little ragamuffins with hatred for Benjamin Linus in their hearts found me and caused me to be reborn anew. First there was English physicist Michael Faraday. Then came Egon from Ghostbusters.

C.S. Lewis’ arrival to the Island involves her atheist anthropologist ways discarded as she was reborn in the Biblical water of the Sawyer-Ana Lucia fuckpool. And that pilot reminded me of the hippie know-nothing do-gooders I knew while I was avoiding perilous compulsory military service in the Carribean.

It’s starting to look like the Dharma Initiative is still alive and well, and looking for revenge on the dude who destroyed their installation. How deep this conspiracy goes, and what Jack, Hurley, Kate, Sayid and the rest of the Oceanic Six do to win the favor of these Linushunters….who knows?

BTW C WHAT I DID THURR?

When we finally saw the helicopter, the look of joy on Jack’s face popped a thousand boners.

The only thing scarier than that was is the current state of Kirsten Dunst. How many lives will unrequited love for Jake Gyllenhaal claim?

I guess I’m still wondering why you didn’t invite me over for a cup of cocoa. I would have flown to whereever you are in a second. I’d fly anywhere to see you in person. Did you not like that hot pic of myself? I have attached a screencap of Vincent that I hope will endear me to you further. This is not a crap e-mail.

vincent, you’re adorable, but take that fucking transponder off your back.

Fuck the Cloverfield guy who wrote this episode. Did you see it? The chick from mean girls? The interracial relationships? The destruction of a liberal gay paradise? What did you think? Did you see Godzilla with Matthew Broderick? I want to know everything about you. Usually I would just send a copy of All My Friends Are Going to Be Strangers, but you’re a special one.

Lately I’ve been trying to not try so hard. You can’t keep coming on strong. You leave no space for the other person.

Still, I want to know you. I want to know everything about you. Do you like Republicans usually? I want to caress your arm hairs. Are you in favor of tax cuts? If you don’t support Israel, I can never be in love with you. If you’re not against amnesty for illegals, I can never hold you in my arms. If you don’t sincerely believe that Terry McAuliffe is the most disgusting man in America, we are not in love.

Too much? I also attached that cute song from the Mac commercial. You know the one!

This morning, I checked my inbox, and there it was. A reply from iwantjackinsideme891.

Dick Cheney, the vice president of the United States, is the senior contributor to This Recording. He lives in Washington D.C. You can find his season 3 recaps here.

Why do you cry, humans?

Claire on who to kill.

Owen and Wes in Vogue.