John Lennon wrote poetry. More specifically he wrote doggerel. I think doggerel is pretty underrated as far as art forms go. If somebody published the poems Tess and I have co-authored on IM over the years they’d make a mint. Well, maybe not a mint but they’re worth at least the paper they weren’t printed on. Lennon was a genius with words. The neighboring Liverpool poetry scene fomented the notion of pop poetry.

If you hear any early interviews with the Beatles it’s clear that all four are hilarious. John in particular had a keenly absurd sense of humor that translated extremely well to radio. He could be caustically funny, influencing the confrontational interview style of Bob Dylan. He was a polymath, always writing poems and drawing pictures while also making music. 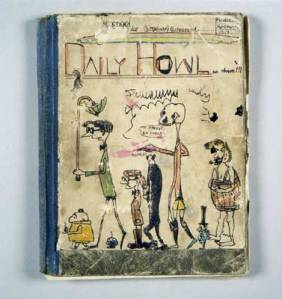 Lennon started writing and drawing early in life, with encouragement from his Uncle George, and created his own comic strip in his school book, which he called “The Daily Howl”. It contained drawings (frequently of crippled people) and satirical writings, often with a play on words. Lennon wrote a weather report saying, “Tomorrow will be Muggy, followed by Tuggy, Wuggy and Thuggy.” 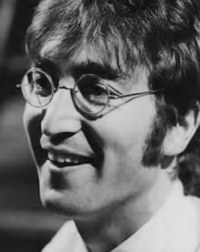 Lennon was adept at free association and improvisation in his linguistic explorations, which can be seen in both his prose writing and a portion of his lyrics. Use of puns, near-homonyms, bizarre imagery, disconnected narrative threads and references, creative misspellings, and abrupt, unresolved conclusions. In many ways its style is similar to books written by Spike Milligan or the spoken nonsense of Stanley Unwin. 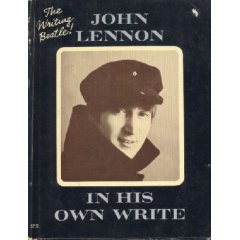 Some poems from Lennon’s two published collections of poetry, A Spaniard In The Works and In His Own Write and a posthumous volume of pictures and such, Skywriting By Word Of Mouth.

I was bored on the 9th of Octover 1940 when, I believe, the Nasties were still booming us led by Madalf Heatlump (Who had only one). Anyway, they didn’t get me. I attended to varicous schools in Liddypol. And still didn’t pass-much to my Aunties supplies. As a memebr of the most publified Beatles me and (P, G, and R’s) records might seem funnier to some of you than this book, but as far as I’m conceived this correction of short writty is the most wonderfoul larf I’ve ever ready.
God help and breed you all. 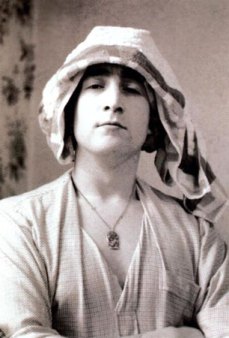 Arf, Arf, he goes, a merry sight
Our little hairy friend
Arf, Arf, upon the lampost bright
Arfing round the bend.
Nice dog! Goo boy,
Waggie tail and beg,
Clever Nigel, jump for joy
Because we are putting you to sleep at three of the clock, Nigel.

A Surprise for Little Bobby

It was little Bobby’s birthmark today and he got a surprise. His very fist was lopped off, (The War) and he got a birthday hook!
All his life Bobby had wanted his very own hook; and now on his 39th birthday his pwayers had been answered. The only trouble was they had send him a left hook and ebry dobby knows that it was Bobby’s right fist that was missing as it were.
What to do was not thee only problem: Anyway he jopped off his lest hand and it fitted like a glove. Maybe next year he will get a right hook, who knows?

I strolled into a farmyard
When no-one was about
Treading past the troubles
I raised my head to shout.

‘Come out the Cow with glasses,’
I called and rolled my eye.
It ambled up toward me,
I milked it with a sigh.

‘You’re just in time’ the cow said,
Its eyes were all aglaze,
‘I’m feeling like an elephant,
I aren’t been milked for days.’

‘Why is this? ‘ I asked it,
Tugging at its throttles.
‘I don’t know why, perhaps it’s ’cause
MY milk comes out in bottles.’

‘That’s handy for the government,’
I thought, and in a tick
The cow fell dead all sudden
(I’d smashed it with a brick). 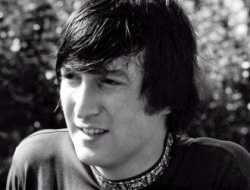 I have a little budgie
He is my very pal
I take him walks in Britain
I hope I always shall.

I call my budgie Jeffrey
My grandads name’s the same
I call him after grandad
Who had a feathered brain.

Some people don’t like budgies
The little yellow brats
They eat them up for breakfast
Or give them to their cats.

My uncle ate a budgie
It was so fat and fair.
I cried and called him Ronnie
He didn’t seem to care

Although his name was Arthur
It didn’t mean a thing.
He went into a petshop
And ate up everything.

The doctors looked inside him,
To see what they could do,
But he had been too greedy
He died just like a zoo.

My Jeffrey chirps and twitters
When I walk into the room,
I make him scrambled egg on toast
And feed him with a spoon.

He sings like other budgies
But only when in trim
But most of all on Sunday
Thats when I plug him in.

He flies about the room sometimes
And sits upon my bed
And if he’s really happy
He does it on my head.

He’s on a diet now you know
From eating far too much
They say if he gets fatter
He’ll have to wear a crutch.

It would be funny wouldn’t it
A budgie on a stick
Imagine all the people
Laughing till they’re sick.

So that’s my budgie Jeffrey
Fat and yellow too
I love him more than daddie
And I’m only thirty two.

I sat belonely down a tree,
humbled fat and small.
A little lady sing to me
I couldn’t see at all.

I’m looking up and at the sky,
to find such wonderous voice.
Puzzly, puzzle, wonder why,
I hear but I have no choice.

‘Speak up, come forth, you ravel me’,
I potty menthol shout.
‘I know you hiddy by this tree’.
But still she won’t come out.

Such sofly singing lulled me sleep,
an hour or two or so
I wakeny slow and took a peep
and still no lady show.

Then suddy on a little twig
I thought I see a sight,
A tiny little tiny pig,
that sing with all it’s might ‘I thought you were a lady’,
I giggle, – well I may,
To my surprise the lady,
got up – and flew away.

Molly Lambert is senior editor of This Recording

OH AND HE WAS ALSO IN A BAND

“The Ballad Of John And Yoko” – The Beatles

“You Know My Name (Look Up The Number)” – The Beatles

The Playboy Interview With John And Yoko

I Write And Cast The Harry Nilsson Biopic

This Recording Is The Blog-In For Peace