I’ve read Pound’s first encounter with Henry James. H.D. on her first meeting D.H. Lawrence. Picasso’s love for Henri Rousseau, and I’ve seen Red Groom’s painting of De Kooning’s and Rothko’s accidental meeting in Washington Square. But to this day Franz Kline meeting Robert Creeley is one of the most beautiful things that I have ever witnessed. Bob and I were drinking beer in one of the booths that lined the walls of the old Cedar Bar.

Bob had recently moved back to the states and had stopped off in New York on his way to Black Mountain College. Bob was wearing the blue winter coat that Zukofsky had given him. He didn’t have any money, and I had credit at the bar. It was late in the afternoon, and Franz Kline walked in and sat down next to me. Franz, meet Robert Creeley. Awe came over Kline’s face. He shifted his weight, adjusted his brown hat, and took Bob’s hands and held them. “I can’t tell you how much your poetry means to me.” Franz was still holding Bob’s hands when Bob broke the silence. “Thank You.”

A Note on Franz Kline

There are women who will undress only in the dark, and men who will only surprise them there. One imagines such a context uneasily, having no wish either to be rude or presumptuous. Darkness, in effect, is the ground for light, which seems an old and also sturdy principle. There is nothing quite so abrupt and even pleasant as such “light”—ask any woman. Think of the masses of misunderstanding that come from a betrayal of this. Make a list. Picasso? Much a way of being about something, minus night, etc. There are some men for whom it seems never to get dark. As, for example, for Klee it never quite seems to be sun, etc. 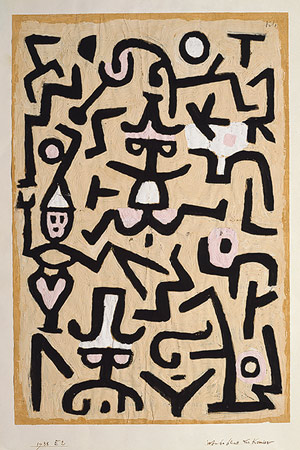 But, more interesting, think of it, a woman undressing in broad sunlight, black. What if light were black—is there black light? If there is black light, what is black? In other words, argue to the next man you meet that we are living in a place where everything has the quality of a photographic negative. Take hold of his coat, point to anything. See what happens. 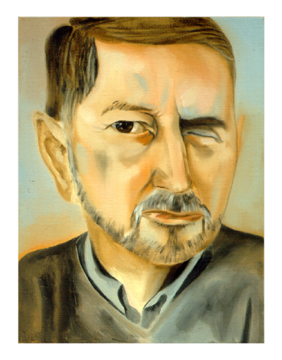 With Kline’s work, if the blacks were white, and vice versa, it would make a difference, certainly. It has to be black on white, because there he is, New York, etc. He has no wish to fight senses and all. But he is a savagely exact laugher, call it. I don’t know literally if he depends on argument for a means to cohabitation, but I would myself argue that he is a lonely man. Men rarely laugh this precisely, without such a thing for a control. What is ‘funnier’ than forms which will not go away? If you say this to someone, they will laugh at you, but all the time, right behind them, there is a skyscraper! It’s incredible how they can notice it, if they do, and still talk to anyone. 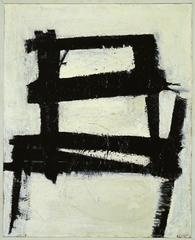 So what is form, if it comes to that. That question I once tried to answer in relation (as they say) to the theater. I was convinced that a man, formally, is no more and certainly no less than a chair. Fool that I was, I took two chairs, placed them either side of me, and sat down on the floor. The answer was, from these friends: Who would go to the theater to see a man be a chair? What would Kline have said, if anything. Is this thing on the page opposite looking at you too? Why do you think that’s an eye. Does any round enclosed shape seem to you an eye.

There is no ‘answer’ to anything. A painter (possibly a musician) can assert this more effectually, more relevantly, than any other ‘artist.’ He can be present all at one time, which no writer can quite be—because he has to ‘go on.’ If no one sees a painter, or, rather, what he is doing—finally, not ‘doing’—doesn’t he still have things? At least no man can point at a painting and say it’s nothing, he’ll be lucky if it doesn’t come down off the wall and club him to death for such an impertinence.

God knows we finally enjoy, deeply enjoy , wit, the grace, the care, of any thing—how it is. Kline’s audience (no doubt in Paradise) will be a group of finely laughing women, plus what men won’t be jealous.

Robert Creeley no doubt would have been an important part of This Recording had we the good grace to start this thing some sixty years ago. 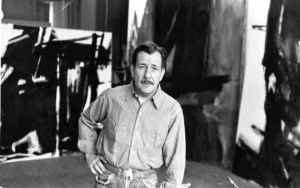 Will and Charles Simic duel.

Houses in the ring to pass through.

Poetry eases the pain of being a man.

Will Hubbard and Franz Kline.

The time is, the air seems a cover.

Women of the year.

Danish gets halfway through the best tracks of ‘07.