Minor Changes to a Formula

The children build them first. Shaved pine, notched and sanded, “interesting playthings typifying the Spirit of America.” On my grandmother’s rug, amid incessant sneezing, I was given the use of my father’s Lincoln Logs. 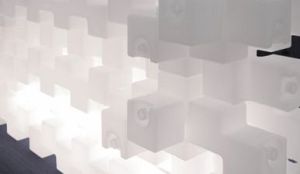 Cabins were boring, a castle or highway was more to the point; but only so much can be done with right angles, and after all, “the more logs a child has, the more things can be built.” If the pieces don’t fit together, they must be balanced upon one another. Imagination leads to instability, danger, and eventually a pile of rubble and a smile.

Older and richer, we turn toward customizability. The offer is familiar, communes of gently curving asphalt, white trim and light-hued siding. In being each one slightly different from the next, they achieve a paradoxically heightened, gross uniformity. Shallow matches of form and function parade as taste, suggesting that minor changes to a formula might satisfy the entire range of human needs.

Ipods were all exactly the same, no two iPhones will ever be. Which experience is more pleasurable?

And what if your house really did come in a box? I imagine long-stay travel, emergency housing, ephemeral communities in fields of hip-high, autumn-gold grass. How much variation could be found in the box, and could there be peace-of-mind—or better yet, release-of-mind—in your adult set of Lincoln Logs? 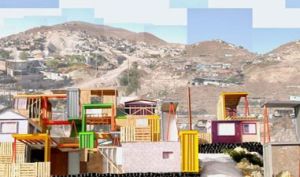 I wonder, too, if we are educating a citizenry that actually possesses the intuition, motivation, and time to discern what they could actually need in a dwelling? Doesn’t part of our joy in buying anything derive from the very notion that it’s just like the object other strangers are putting into their homes, into their mouths and heads? A remote though strangely intimate bond is created by the marketing of identical objects and ideas.

Frank Lloyd Wright got it right, of course. His American System-Built Houses were pre-cut in the factory; construction was assembly, pure and simple. And yet four drawings of these structures reveal little aesthetic uniformity—each has its particular elegance, and seems fitted to its site rather than to the drowsy whims of its financiers.

Sadly, it’s raining when I walk out to tour the Saran Wrap house. I am allowed to seek a moment’s calm shelter among its aluminum stilts, and the drops make no sound as they kiss the plastic windows above. I ask the guards, as though they’re real-estate agents, if I can take a quick look inside. They laugh to each other; they say “no way”. They say it is because of what might be tracked in on the soles of my feet.

Will Hubbard is the contributing editor to This Recording. This is his tumblr.

Did you read Tyler’s piece?

It made our whole deployment!