A Sound Once Forgotten

There’s something about the overall state of independent music to absolutely loathe right now. It’s not enough to just complain that a favorite artist has sold out. I don’t like the phrase and I hate that concept.

If a gross amount of the once music-purchasing population is now using such download programs as BearShare or music communities such as Indie_Exchange to cultivate their music collection, selling out isn’t the last resort, it’s the only resort. Therefore, the last couple of years have turned the music scene, especially its late-night concerts and club nights into a corporate gold mine.

Party promoters seek second-rate DJs to use their sleek MacBooks to “spin” safe, alternative tunes. Hipster Runoff would refer to this style of music as “mainstream alt” and its DJs as “alt-bros.” The terms are humorous, yes, but they also hold a large amount of truth. To sell anything, a genre (let’s say post-punk for the early part of this millennium, and electro for the latter) must be usurped from its original fans and sold back to consumers who don’t necessarily know any better and frankly don’t care. Is anything authentic anymore? And if it is, would it be appropriate to write an essay putting a name to something that’s pretty unique in the first place?

For the sake of this piece, I’d argue yes, and so, welcome to “new disco.”

In any popular musical movement, there has to be something brewing underneath the surface that will hopefully take its place. As post-punk reigned throughout the earlier part of the millennium, electro began to emerge and finally, with the sampling of “Harder, Better, Faster, Stronger” by Kanye West, taking its place as the popular nightlife music genre. In the past year or so, new disco, built around cleaner synths, more euphoric lyrics, and a glamorous aesthetic found an audience, albeit small, but still eager for something new. The most obvious example of this sound is found through Pitchfork faves Hercules and Love Affair.

The production project led by DJ Andy Butler, Hercules and Love Affair is the sort of fresh breath of air that is lacking in the current state of music. That’s not to say that their sound is inherently original. Like previous genre fans before them (say Interpol with post-punk), the band has found its footing by embracing a sound once forgotten. 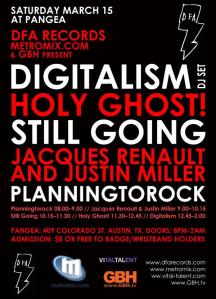 “Hercules Theme,” is an early disco/big band hybrid of the nth degree. It’s fun and easy going, like disco once was. “Shadows,” an earlier single not found on the group’s self-titled album, sounds ripped from the genre’s original era. Vocalist Kim Ann Foxman coos over the record and even in the corporate preening of the nightlife scene today, one feels effortless in the manners, thrilling in their appearance, and liberated in their thoughts. “Raise Me Up” and “Blind,” the group’s popular single sung by Nina Simone-esque crooner Antony Hegarty, completely embraces the disco aesthetic for what it was: beautiful and triumphant.

david bowie bette midler and antony hegarty among others

Although it’s become something of an overused cliché, disco was an exultant genre that frequently embraced a free-for-all independent aesthetic in its fans that ran the gamut from clothing to sexuality. It was mocked, yes, but it was also a point in which people were given license to be themselves, whatever that meant.

And so, Hegarty, the lyricist for both songs has taken that ethos and incorporated it into Hercules and Love Affair’s sound. In “Raise Me Up,” Hegarty sings about his acceptance of his secret love being a man and in the masterpiece “Blind,” love and personal redemption take precedence. Although Hercules and Love Affair emerged as the forbears of the trend, there are other artists from across the globe embracing the sound.

“Raise Me Up” by Hercules and Love Affair (mp3)

Holy Ghost! are a DJ duo from Brooklyn recently signed to DFA Records, the label imprint that eagerly embraced the new old sound (sidenote: James Murphy and Pat Mahoney of DFA Records and LCD Soundsystem host the underground disco club night called “Special Disco Version” in New York City. The two recently went on tour to bring the event to other cities). Their biggest single so far is “Hold On,” a triumphant tune about the glory of a night on the town. The beat is smooth, very much unlike the aggressive, dirty synths that are popular in the electro scene.

The mysterious Lovelock recently released an 8-minute long new classic that is so good, you can’t help but question its authenticity. The song sounds like it was ripped from another era, and that is a good thing. On his MySpace, Lovelock includes a couple of other songs that are similar in feel but don’t follow the same aesthetic that makes “Maybe Tonight” so brilliant. He’s a new artist, so there’s still time for him to continue to develop his sound. The same idea could be applied to Andy Butler’s early work with Hercules and Love Affair.

Many of the songs were produced and recorded in the middle of this decade, thus allowing Butler the time to develop a cohesive sound from song to song. Occasionally, the group deviates from their tried and true sound (such as in early single “Classique #2” or the Chicago house anthem “You Belong”) but in general, their strongest work comes from their work within the new disco genre.

The Golden Filter, like many of the emerging new disco artists, has maintained a level of anonymity. The consensus thus far, is that The Golden Filter is a product of an already established musician based in New York. The single “Solid Gold” popped up on blogs and on a MySpace page earlier this summer, though the singer’s identity remains a mystery.

This would play similar to another new disco artist, Little Boots. An mp3 of Little Boots’ first single, “Stuck on Repeat” (produced by Joe Goddard of Hot Chip) was posted to her MySpace and sent to various dance or electro blogs, with the singer maintaining a level of anonymity. Eventually, Little Boots was revealed to be Victoria Hesketh, lead singer of electro girl-group Dead Disco.

Kleerup‘s orchestral disco continues to blow up across seas, as the producer’s perfectly structured songs work together beautifully with the gaggle of Swedish pop stars like Lykke Li and Robyn who sing on each record.

And then there is this label called Italians Do It Better. If you read any independent style or music magazine, I’m sure you’ve encountered the fanfare and luckily, it’s not unwarranted. The two biggest acts of the label, Glass Candy and Chromatics, are not new to the music scene. In fact, it seems to have taken a little push by the Italo disco lovers of Italians Do It Better for the two groups to find their sound, and oh what a sound it is.

Both steal snippets of the Italo disco aesthetic that found its footing in Europe during the late ‘70s and early ‘80s as a starting point, occasionally using harder synths or more traditional instruments for the production of their records. In the end, the experimentation works. Such gems as “Hands in the Dark” or “Miss Broadway,” create the sort of distant and disaffected aura that made disco as a scene so glamorous in the first place. 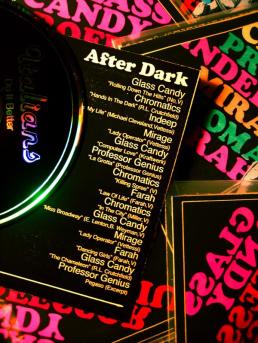 Brittany Julious is the senior contributor to This Recording. She writes at Glamabella and Britticisms. She last wrote in these pages about Francoise Hardy.

MORE NEW DISCO FOR YOU

Molly’s take on Jack Nicholson is a most fitting funeral oration.