I Love You, Man

Critics were split on I Love You, Man and so was the crowd I went with. Half thought it was funny (if not memorable) and inoffensive and the other half thought it was bland and misogynistic. I remember a similar argument after Knocked Up where a female friend defended Leslie Mann’s character’s actions against a guy arguing that Paul Rudd’s husband character had done nothing wrong. Bromantic passions run high.

What’s bland is not Paul Rudd’s character, who’s actually quite well sketched out, but Jason Segel’s. Which is strange because Segel’s brand of creepy-funny seems like an ideal match for Rudd’s muddled adorableness. I was expecting something more along the lines of The Zoo Story or The Cable Guy. 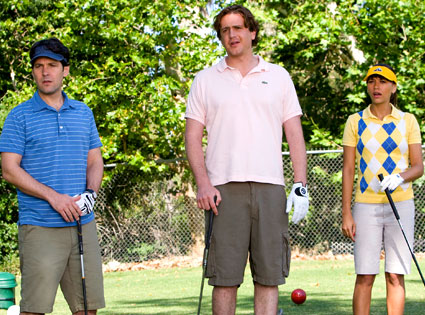 oh no, not another big set piece!!!

Instead what happens is that Segel’s character seems to shift from scene to scene to suit the needs of the questions posed to Rudd’s character. Which could also be funny, but it’s just kind of confusing. Lots of ideas are set up and never returned to again. There are some really funny bits in the movie and the chemistry between Segel and Rudd is charged with a first date giddiness, but the film never quite makes the leap from good to great. 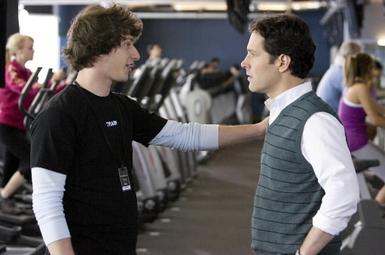 Comedies have focused on male immaturity for more or less all of time. What is so weird about these movies to real life slacker girls like me is the way they all portray women as inherently responsible. I must have slept through that memo. Women are always shown being driven endlessly towards goals of marriage, responsibility, financial security, with the men bucking against it.

Jon Favreau as Alex Carnevale in the future

Besides Charlyne Yi, girls in these comedies tend to all get cast in this light. The single friend in I Love You, Man (the charming Sarah Burns, memorably from a FOTC episode) is typed as desperate for a man, any man. Most of her laughs come from this, and she’s really funny. But in a movie where a single male character who doesn’t have his shit together is portrayed as having a life worthy of emulation, it feels a little bit sexist.

they live in Silverlake, naturally

Rashida Jones is as winning as she can possibly be, but she is meant to be the Ralph Bellamy of this love triangle and has no chance against a Rush covers montage. By the time the movie gets to the couple questioning their decision to get engaged I was pretty sure they ought to break up. Like in Apatow movies, a lot of timely and sensitive real life issues about gender and relationships are touched upon and then buried under jokes.

The only trailer that ran before the movie was for Inglorious Basterds, which was strange. Despite the fact that I finally just saw (and loved) Death Proof, I can’t feel myself getting that stoked for a war movie, even a Quentin Tarantino war movie. I’m just not sure I care yet about B.J. Novak and Samm Levine murdering Nazis. Can I give you a maybe? If it were a World War One movie I’d be so down. 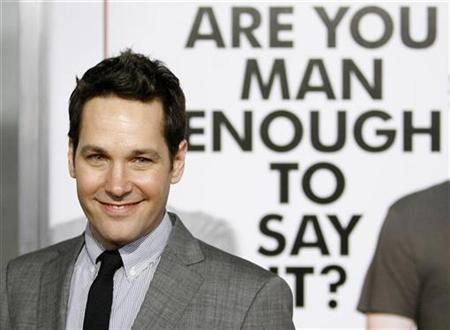 even though Mahnola Dargis really hated ILYM, she agrees with all of humankind that Paul Rudd is the fucking cutest ever

War movies are the ultimate bromances. They have the same message as most of these comedies; that nothing in the world is better, more fun, or more awesome than the not-gay but gayish close friendships between straight men. Most movies violate Bechdel’s rule so flagrantly that it’s depressing to talk about.

What we need are more girlmances. I guess Sex and The City is a girlmance. Big Love is definitely a girlmance. Gossip Girl is a gossip girlmance. Little Darlings is a great classic girlmance. I have high hopes for the long-rumored Amy Poehler and Isla Fisher collaboration Groupies if it comes to fruition.

One thing I Love You, Man got completely right: Sunday night programming on HBO really IS amazing. Or at least it was until ten last night, when Big Love and Eastbound & Down wrapped up their seasons. I was already subjected to one Entourage promo tonight and had to wash my eyeballs out with Axe bodyspray. When does Curb start again?

Ashton snaps a pic of Demi bending over at Bruce Willis’s wedding to a fetus. Planet Hollywood, bay bay!

Ciara and Justin Timberlake make love and sex and magic 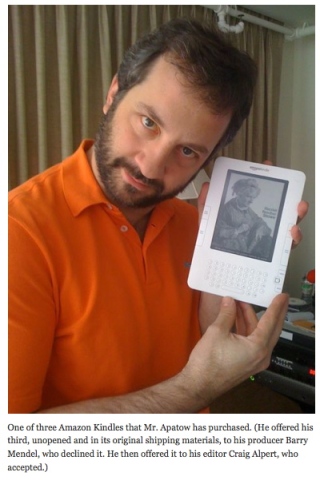 Molly Lambert is the managing editor of This Recording

We will come to a point.

We can’t overcome that.

This is a bad matchup.