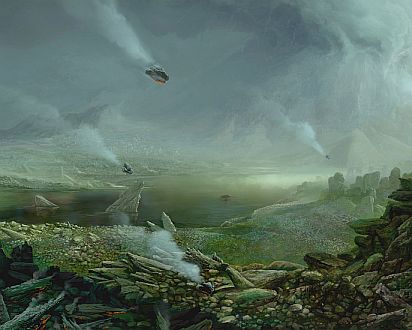 I’ve Seen the End of the Day Come Too Soon

I’m something of an apocalypse expert, you see.

Not the kind of expert who knows about a subject, but rather I’m the more modern style of expert: the kind who constantly talks and talks about a subject and confuses this for knowledge. Of course, being that the apocalypse (arguably) hasn’t yet occurred, it’s a safe playing ground.

In order to keep you interested, my reviews will be short and meaningless.

Cormac McCarthy in the ongoing series of famous authors rendered as lines.

McCarthy’s The Road: This post-apocalyptic America is made up of sparse prose and empty stomachs. It’s brilliant in its long stretches of hopelessness, and the sadness of it all becomes the most overwhelming during the few moments of hope. My only complaint is the unbelievable deux ex machina ending. Though I can recognize the ending as a thematic necessity, I just didn’t buy it. Also, they’re turning this into a buddy film starring Viggo Mortensen and Rob Schneider.

This is the end of The Road

I Am Legend: This movie is worth it simply to see Will Smith’s incredible portrayal of terror as he searches for his lost dog in a dark house – I’ve never seen an actor appear so convincingly scared. Otherwise, the filmmakers clearly couldn’t decide between sticking with the original novella’s plot or a less-complicated plot, and the movie suffers for it. And why do all modern zombies have super-speed, super-strength, and super-wall-climbing-ability? Did they all get bitten by radioactive zombie spiders? Also, the virus changes their fundamental bone structure. Interesting.

Admit it, you’d totally hook up with that zombie.

Cloverfield: This is the second dumbest movie I have ever seen. The first dumbest was Career Opportunities, which at least featured 83 minutes of Jennifer Connolly in a white tank-top.

I’m not going to go so far as to say I didn’t enjoy watching Cloverfield, but a significant part of my enjoyment derived from thinking about how much I was going to mock the film after it ended. In general, when I see a monster/horror movie set in New York City and then I leave the theater and I am actually in New York City, I expect to feel at least a tiny bit apprehensive.

Jennifer Connolly is not just sexier than the Cloverfield monster, she is also scarier.

Crace’s The Pesthouse: In April 2007, New Yorker magazine featured a review of The Pesthouse penned by Joyce Carol Oates. When I read the review I thought, “Oh, man, Joyce is being a total bitch.” Yes, I thought the b-word. I’m not proud of it, but you have to understand that Joyce and I used to date, and it was one of those off-again, on-again things that leave both parties feeling drained and resentful. Why couldn’t we make it work? The passion was there, but the world kept getting in the way.

Anyway, Joyce, I’m sorry I doubted you. Compared to The Pesthouse, Cloverfield is a compelling apocalypse narrative. Make sure you read the second page of Joyce’s review, because that is where the good shit goes down.

Why is it that in all post-apocalyptic narratives, good (The Road) and bad (The Pesthouse), there are always roving bands of outlaws? Is that really what we think is going to happen? No one thinks someone in the government will survive (the Speaker of the House, maybe?) and we’ll cobble together some sort of law and order? Nobody?

At least there’d be some impromptu kick-ass posses, ala Wild West style, don’t you think?

A GUIDE TO APOCALYPSE SEMANTICS

Pre-Apocalypse: Set immediately before an impending apocalypse. Usually, because of heroic efforts on the part of the protagonist(s), the apocalypse is avoided. This type of apocalypse can be found mostly in summer blockbusters starring Bruce Willis, and possibly in the kind of novels I don’t read. Examples are Armageddon, Deep Impact, and The Core.

Post-Apocalypse: Set amongst the ruins of the Earth after the apocalypse has occurred. Often these narratives contain lots of bleak social commentary, unless it’s a three-hour Kevin Costner movie about water postmen, in which case it’s a portrait of redemption and hope. Examples are The Road and The Pesthouse. Other examples are the zombie movies I Am Legend and 28 Days Later. Note that these two are a recent development in the zombie movie genre, since normally they fall into the next category.

Apocalypse: Set during the actual apocalypse, when all the cool stuff is happening. Since often the apocalypse is a quick event (a giant meteor, a nuclear war), this type of narrative requires the rare apocalyptic force that can be spread out over an hour and a half or a few hundred pages. Hence, this category is primarily made up of zombie or other monster movies, where the reader/viewer actually witnesses the slow destruction of society. Examples are most zombie movies (with the exception of I Am Legend and 28 Days Later, which both follow minimal casts long after the initial destruction is complete).

Post-Apocalypse-Apocalypse: This is when, during the post-apocalyptic period, there is another apocalyptic event, such as in The Pesthouse, when poison gas inexplicably rises from the ground and kills villages of people for no reason whatsoever and then the village burns to the ground. Or maybe this should be Post-Apocalypse-Holocaust.

Post-Post-Apocalypse: This category encompasses all books and movies that follow the rebuilding of civilization after the initial post-apocalyptic period has been survived. Yes, this is technically still post-apocalyptic, but there’s an important distinction. The notable entry in this category is 28 Weeks Later, the excellent sequel to 28 Days Later.

Post-Post-Apocalypse-Apocalypse: Actually, 28 Weeks Later really falls into this category, since during the post-post-apocalyptic rebuilding of London, there is another apocalyptic event. If they decide to make the movie 28 Years Later, I’d just consider that cycling back to the Post-Apocalypse. We need limits, people!

Jeff Goldberg is an author living in New York City. You can hear an audio version of his zombie short-story, “These Zombies Are Not a Metaphor,” at WPR (Wisconsin Public Radio).

“Burgalar in the Bungalow” – The Cassettes (mp3)

Movies we were anticipating.

Six movies that stuck to Andy.

Take away all our sadness. 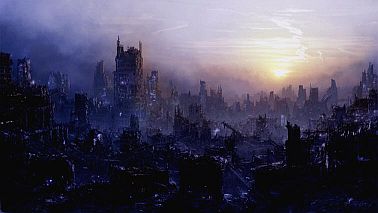 3 thoughts on “In Which We Deconstruct the Apocalypse”